Yaqut Cholil Qoumas (“Gus Yaqut”) is the Republic of Indonesia’s Minister of Religious Affairs and co-founder of Humanitarian Islam and the Center for Shared Civilizational Values.

Gus Yaqut is also former Chairman of Gerakan Pemuda Ansor, the world’s largest Muslim young adults organization and a primary vehicle for the grassroots mobilization of Nahdlatul Ulama’s over 90 million followers. All Ansor members belong to Barisan Ansor Serbaguna Nahdlatul Ulama, or Banser — an active militia force. During his tenure as Chairman (2015 – 2020), Gus Yaqut gained renown as a guardian of Indonesia’s unique brand of inclusive, multireligious and multi-ethnic nationalism. 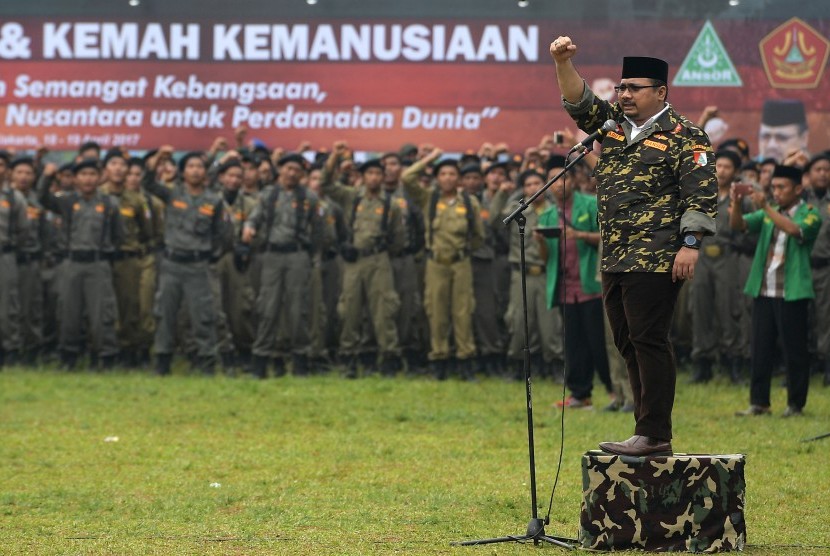 Ansor’s 15th National Congress opened with a screening of The Divine Grace of East Indies Islam (above), which the New York Times hailed as “a relentless, religious repudiation of the Islamic State and the opening salvo in a global campaign by the world’s largest Muslim group to challenge its ideology head-on.” 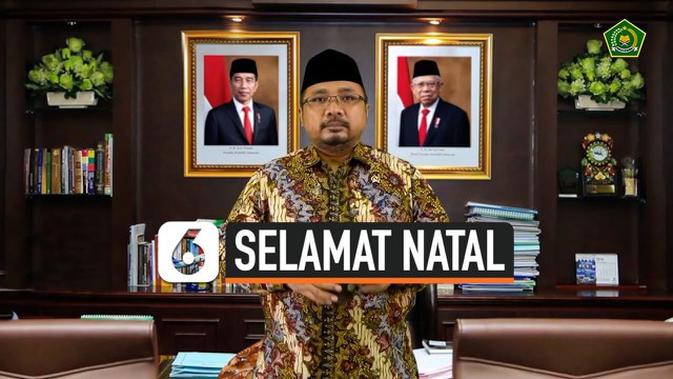 Yaqut Cholil Qoumas is the son of Kyai Haji Muhammad Cholil Bisri (1942 – 2004), who in 1998 co-founded Indonesia’s largest Islamic political party — the National Awakening Party (PKB) — with Indonesia’s first democratically elected president H.E. Kyai Haji Abdurrahman Wahid and other prominent Nahdlatul Ulama (NU) leaders. Gus Yaqut is the younger brother of NU Executive Board General Chairman Kyai Haji Yahya Cholil Staquf, and served as a PKB Member of Parliament from 2014 until his 2020 appointment as Minister of Religious Affairs. Minister Qoumas is also the nephew of Kyai Haji A. Mustofa Bisri, who is a former Chairman of the NU Supreme Council; co-founder and Chairman of Bayt ar-Rahmah; spiritual leader of the Humanitarian Islam movement; and one of Southeast Asia’s preeminent religious figures. 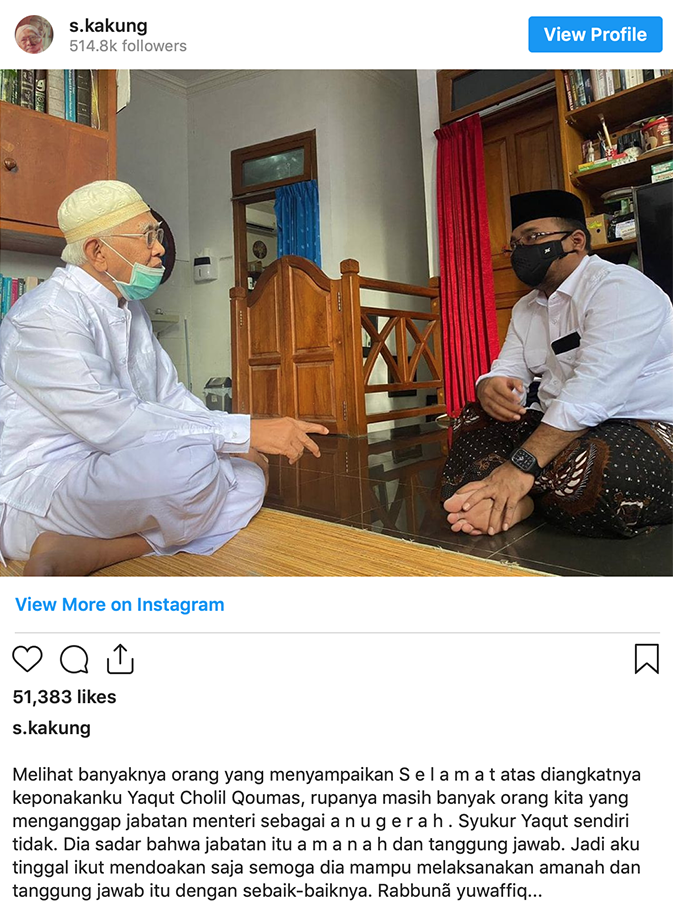 Seeing how many people have congratulated my nephew on his appointment, it appears that many of our people still view the position of Minister as a boon. Thank God, Yaqut does not. He is aware that this position is a sacred trust and solemn responsibility. All I can do is join others in praying that he will be capable of fulfilling this sacred trust and meeting his responsibilities. May God grant him success in doing so.

“The competitive map for presidential candidates in 2024 may shift dramatically following the appointment of Yaqut Cholil Qoumas to the position of Minister of Religious Affairs. At a minimum, he will serve as a major obstacle to any presidential candidate seeking to weaponize radical Islam.”

Gus Yaqut has used his capacity for mass mobilization — which includes an extensive network of supporters stretching from the very center of power all the way to Indonesia’s grass roots — to spearhead a series of highly successful nationwide campaigns. These include Kirab Satu Negeri (“One Nation Parade”), which set off from five points along the perimeter fringes of Indonesia’s vast archipelago on September 16, 2018 and proceeded along various routes on Indonesia’s major islands, uniting millions of people of different faiths and ethnicities in a reaffirmation of the traditional Indonesian view of religion as a source of harmony and not division.

One month after the culmination of Kirab Satu Negeri — which was held in tandem with the Second Global Unity Forum in Yogyakarta — Gus Yaqut announced GP Ansor’s adoption of the Nusantara Statement at a mass rally of over 100,000 Ansor members, and presented a commemorative plaque engraved with the Statement to Indonesian President Joko Widodo, who held it aloft for all to see. The Statement reads:

“We call upon people of goodwill of every faith and nation to join in building a global consensus to prevent the political weaponization of Islam, whether by Muslims or non-Muslims, and to curtail the spread of communal hatred by fostering the emergence of a truly just and harmonious world order, founded upon respect for the equal rights and dignity of every human being.” 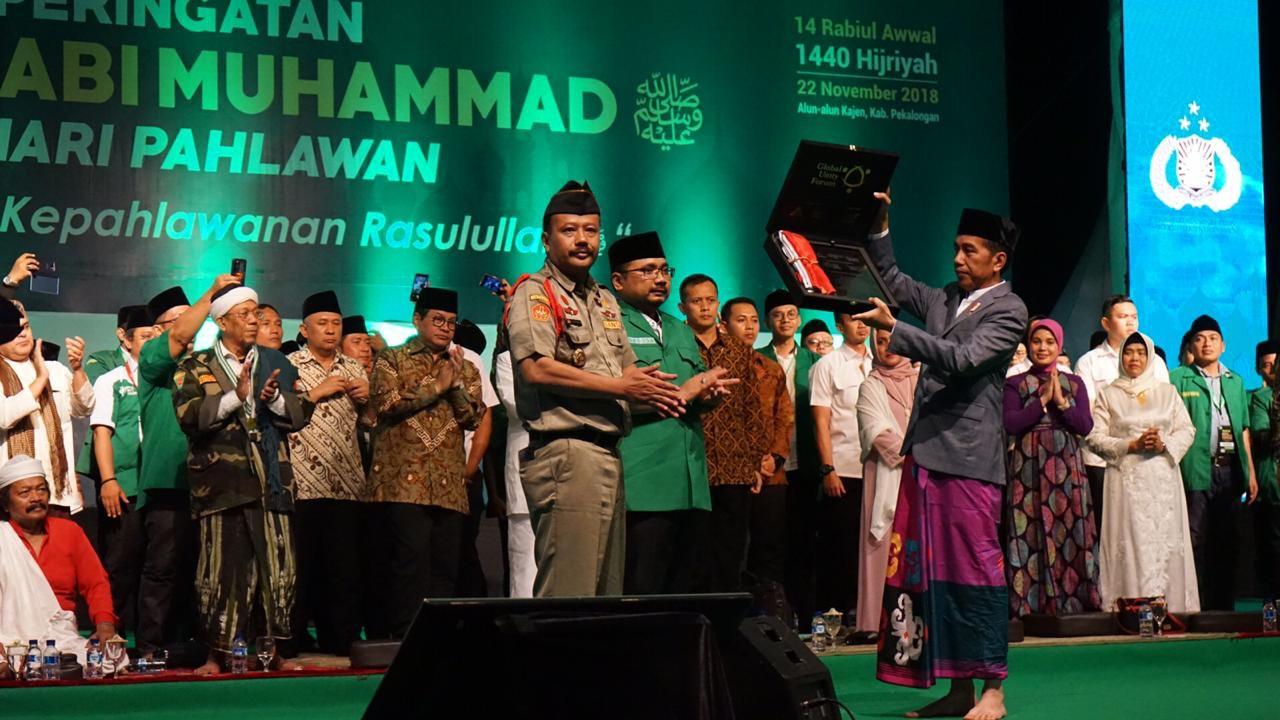 President Jokowi holds the Nusantara Statement aloft for all to see

“The youth wing of Nahdlatul Ulama, an Indonesian Islamic group, is pressing governments around the world to bring Islamic law into line with 21st-century norms.”

“Your very own Gus Dur (Abdurrahman Wahid, 1940 – 2009) helped to lead Indonesia’s transition to democracy. His profoundly humane vision and teachings inspired the birth of the Humanitarian Islam movement. His legacy lives on today in the current generation of leaders who, in 2014, launched the Islam Nusantara campaign to repudiate ISIS’ hateful and violent brand of Islam. And it lives on in the Movement for Shared Civilizational Values as well.”